The concert was presented in conjunction with the University Jewish Chaplaincy in memory of Billy Sharron z’l. 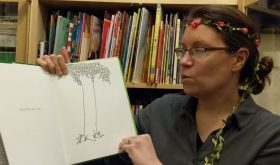