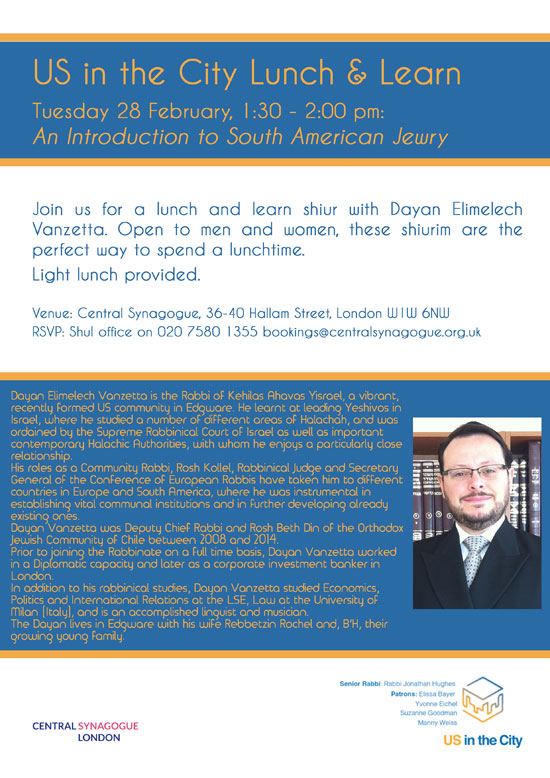 An Intriduction to South American Jewry

Dayan Elimelech Vanzetta is the Rabbi of Kehilas Ahavas Yisrael, a vibrant, recently formed US community in Edgware. He learnt at leading Yeshivos in Israel, where he studied a number of different areas of Halachah, and was ordained by the Supreme Rabbinical Court of Israel as well as important contemporary Halachic Authorities, with whom he enjoys a particularly close relationship.

His roles as a Community Rabbi, Rosh Kollel, Rabbinical Judge and Secretary General of the Conference of European Rabbis have taken him to different countries in Europe and South America, where he was instrumental in establishing vital communal institutions and in further developing already existing ones.

Dayan Vanzetta was Deputy Chief Rabbi and Rosh Beth Din of the Orthodox Jewish Community of Chile between 2008 and 2014.

Prior to joining the Rabbinate on a full time basis, Dayan Vanzetta worked in a Diplomatic capacity and later as a corporate investment banker in London.

In addition to his rabbinical studies, Dayan Vanzetta studied Economics, Politics and International Relations at the LSE, Law at the University of Milan (Italy), and is an accomplished linguist and musician.

The Dayan lives in Edgware with his wife Rebbetzin Rochel and, B’H, their growing young family.