After the Pandemic: Will our World Change? Rabbi Lerer in conversation with Dr Alan Mendoza, Executive Director of the Henry Jackson Society – 13th July 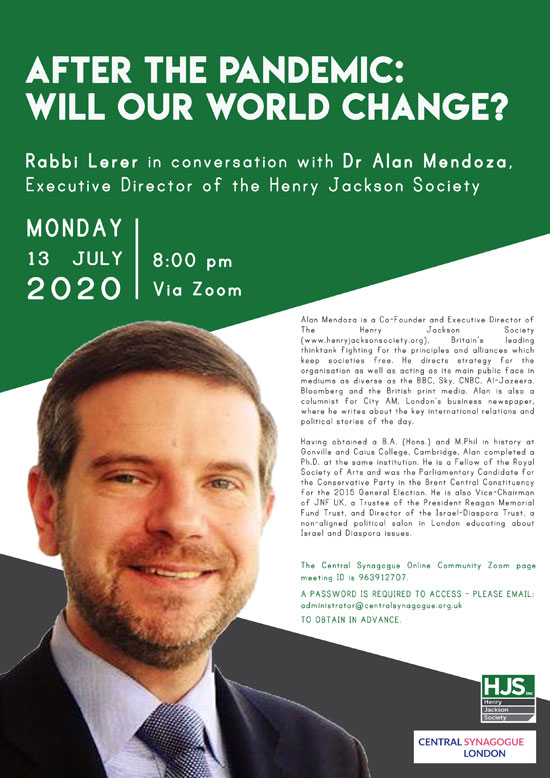 After the Pandemic: Will our world change?

Alan Mendoza is a Co-Founder and Executive Director of The Henry Jackson Society (www.henryjacksonsociety.org), Britain’s leading thinktank fighting for the principles and alliances which keep societies free. He directs strategy for the organisation as well as acting as its main public face in mediums as diverse as the BBC, Sky, CNBC, Al-Jazeera. Bloomberg and the British print media. Alan is also a columnist for City AM, London’s business newspaper, where he writes about the key international relations and political stories of the day.

The End of the Night – Group Theatre Trip – 25 May

Please join us for a trip to Park Theatre on Wednesday 25th May 2022 to see The End of the Night. Limited places available! Book ASAP to avoid…

Challah Make with Rebbetzen Joanne Dove and Rebbetzen Naomi Lerer on Thursday 12th May @18.30 £10 per person to cover costs and come home with enough Challah to…

Join us for a Shabbat UK Traditional Friday Night Service with Chazan Steven Leas on Friday 13th May at 18:45 followed by a chicken soup kiddush with lochshen,…