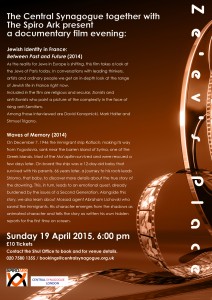 Join us on 19th April to see two documentaries about Jewish Identity in France.

On December 7, 1946 the immigrant ship Rafiach, making its way from Yugoslavia, sank near the barren island of Syrina, one of the Greek islands. Most of the Ma’apilim survived and were rescued a few days later. On board the ship was a 12-day-old baby that survived with his parents. 66 years later, a journey to his roots leads Shlomo, that baby, to discover more details about the true story of the drowning. This, in turn, leads to an emotional quest, already burdened by the issues of a Second Generation. Alongside this story, we also learn about Mossad agent Abraham Lichovski who saved the immigrants. His character emerges from the shadows as animated character and tells the story as written his own hidden reports for the first time on screen